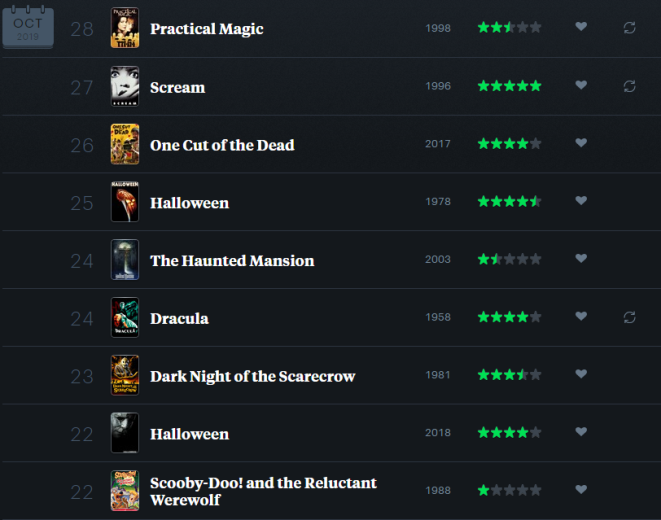 Scooby Doo! and the Reluctant Werewolf

I grew up on these Hanna-Barbera movies, so I don’t know why I never saw this one. If I had seen it as a kid, I might’ve liked it more now. But this was basically just a Wacky Races story, and I had to sit through Scrappy Doo, but there’s no Daphne or Velma?! Ridiculous.

I’m not sure why it took me so long to watch this one. It’s great. Terrific neo-slasher with just enough nods and callbacks to the original.

Dark Night of the Scarecrow

Also not sure why this was off my radar for so long. Terrific pacing and suspense. Every once in a while, though, it felt like a scene was missing. Maybe that was just because it was written for the big screen, and then turned into a TV movie?

I never get sick of this one. Cushing is awesome, and I love that visual of Lee with his eyes all bloodshot.

I’d always been curious to see this one. I felt bad for it – it came out as the sister film of Pirates of the Caribbean, and while that one became this massive international success story, everyone sort of hated Mansion. I can now conclusively state that it’s just not that great. Not offensively bad, but… yeah. It’s no Pirates of the Caribbean.

I watched this as part of the Joe Bob Briggs marathon on Shudder but, in true drive-in fashion, I drank too much and fell asleep before the end of the next flick, Halloween 4. I decided not to count that one.

One Cut of the Dead

I don’t know what I was expecting this movie to be. I’d heard rave reviews for months before I got to see it. If anything, I came to it a little suspicious. Could it really be as good as everyone said? The answer, of course, is yes. What a wonderfully sweet, goofy flick. It left me in a great mood.

It had been a few years since I’d last seen this one, and goddamn does it get better with age. I caught a million more tiny in-jokes and charming, subtle character moments. Now I need to go back and watch the sequels…

I’ve always liked this movie, and I understand why a lot of people adore it. But still, the first half hour is such an awkward, fast-forward info-dump that by the time the plot kicks in, I’m half checked out. Still, it’s got some great moments and really nice performances.