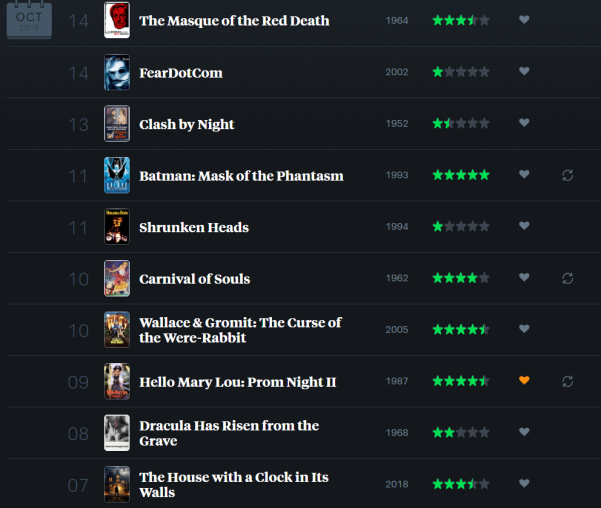 The House with a Clock in its Walls

A good old-fashioned (ie., 80s-style) kids horror-comedy. Nothing special, but enjoyable, and probably the strongest work from Eli Roth.

Dracula Has Risen from the Grave

I was a bit let down by this one. Not enough Christopher Lee. Some cool sets, though.

I’d seen this one before and enjoyed it, but revisiting it was an absolute treat. A great high school possession / supernatural slasher flick that feels at once like an 80s pastiche and a wholly original and unique picture. It’s got a couple absolute brilliant moments and one of my all-time favorite movie kills. If you haven’t seen this one, please check it out. And no, you don’t need to watch the first Prom Night. Ever.

Wallace & Gromit: The Curse of the Were-Rabbit

I’m ashamed to admit this one was new to me. But I loved it! Some great, gentle, incredibly British humor and very impressive nods to classic horror tropes. I guffawed on more than one occasion.

I’ve seen this one several times before, but I had to test out the Criterion edition I picked up a while back. I watched the extended version, which only adds about four minutes worth of dialogue. The extra talky bits made the movie a little more concrete than completely dreamlike, which I appreciated. Still love that score.

I have no idea who the audience for this movie was. It was very PG and kid-friendly, except for all the swearing and when the kids were murdered by gang members. Worst of all, this movie squandered the always brilliant Meg Foster in a potentially cool role.

Batman: Mask of the Phantasm

Colby of ComicBookMedia.com tried to convince me that this one could be classified as horror, so I watched it on his DCUniverse account. It’s pretty grim and violent for a kids’ cartoon, and the Phantasm character is as horror-inspired as the name suggests, but I don’t think it counts as horror. There’s more pulp and noir influence than spooky stuff. Probably the best Batman movie we’ll ever get, though.

This one also doesn’t count because it’s my Noir Alley watch for the week. That being said, I was pretty disappointed. I showed up for Fritz Lang directing Marilyn Monroe in an RKO noir, but what I got was a very tedious melodrama that felt too stage-y. Barbara Stanwyck was great as usual, but Lang’s direction was the blandest I’ve ever seen it.

I recently learned that this was a movie the lady-friend had seen before, so I picked up a used DVD on a recent road trip. This was quite honestly the worst movie I’ve seen in a while. The plot was disjointed, the characters didn’t behave like human beings, and we had to adjust the TV’s brightness several times to counteract the very dark picture. I gave it a single star on Letterboxd for Jeffrey Combs and Udo Kier in thankless roles, and for Stephen Rea going nuts with the very limited material they gave him.

The Masque of the Red Death

It could’ve just been the fact that I watched this right after FearDotCom, but this movie was a masterpiece. Terrific sets and use of color, and some surprisingly fluid and brilliant camerawork from Roger Corman. Vincent Price always seems to have more fun when he’s playing an absolute bastard.